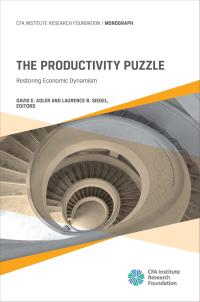 The Productivity Puzzle: Restoring Economic Dynamism, edited by David E. Adler and Laurence B. Siegel, is an anthology of essays about this mysterious stagnation in productivity. It provides new policy solutions in addition to analyses of the problem.

The book’s central innovation is that it is interdisciplinary. Traditional macroeconomics has trouble fully explaining the productivity puzzle because the sources of productivity growth often lie in a country’s specific economic practices and institutions. These institutional differences are better captured by political economists, historians, and social thinkers than by macroeconomists. But productivity also has macroeconomic components, including interest rate regimes and terms and amounts of trade, which are typically missing from political or institutional analyses. That is, neither the macroeconomic nor the institutional approach is adequate to fully capture all the drivers of productivity growth. As a result, the anthology consists of authors writing from multiple perspectives, not just mainstream economics or finance.

The book offers analyses that investors may be unfamiliar with, including statistical debates about productivity measurement and the decline in US manufacturing employment, little-known interest rate mechanisms that might drive misallocations of the economy to lower productivity sectors, and institutional deficiencies in the US innovation “system” that make it hard for those in the United States to translate academic research into actual manufacturing processes as is done in Germany and Japan.

Contributors to the book come from a variety of backgrounds and tend to have a global perspective. They include central bankers, political scientists who study innovation, financial economists, and the Nobel Laureate Edmund Phelps.

The book consists in part of the proceedings from the landmark conference on productivity and dynamism, organized by the editors, that took place at the Museum of American Finance in New York in November 2017 and of which the CFA Institute Research Foundation was a sponsor, along with other firms and organizations. These proceedings have been augmented here by essays relevant to the topic, selected by the editors.

These new analyses present innovation solutions to the problems the book discusses. Understanding the drivers of productivity stagnation and growth is vitally important for everyone, including investors. As Paul Krugman has said, “Productivity isn’t everything, but in the long run, it is almost everything.”

We are thus very pleased to present The Productivity Puzzle: Restoring Economic Dynamism. We believe it is a substantial contribution to the literature on the sources of, and obstacles to, economic progress.

David E. Adler is the author of Snap Judgment (FT Press) about behavioral economics and a producer of the related NOVA documentary Mind Over Money. He also wrote The New Economics of Liquidity and Financial Frictions and The New Field of Liquidity and Financial Frictions (CFA Institute Research Foundation). He is also producer of the PBS documentary America’s Crisis in Healthcare and Retirement and co-editor of the anthology Understanding American Economic Decline (Cambridge University Press), which looks at the prospects for US growth through the precedent of Britain’s comparative economic decline. He is a frequent contributor to City Journal and American Affairs and is a senior advisor to XA Investments in Chicago.

Laurence B. Siegel is the Gary P. Brinson Director of Research at CFA Institute Research Foundation and an independent consultant. He has authored, edited, or co-edited six CFA Institute Research Foundation monographs and is the author of Fewer, Richer, Greener, published by Wiley in 2019. Mr. Siegel serves on the editorial boards of several prominent journals and on the board of directors of the Q Group and the American Business History Center. He has assisted a variety of nonprofit organizations in the role of investment committee chair or member. Previously, Mr. Siegel was director of research in the Investment Division of the Ford Foundation. Before that, he served as a managing director at Ibbotson Associates (now Morningstar). His website is www.larrysiegel.org. Mr. Siegel received a BA in urban geography and an MBA in finance from the University of Chicago.