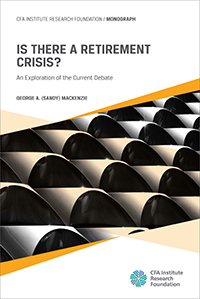 Many quantitative empirical studies of retirement preparedness find that a substantial number of US households face a potential financial crisis at some point in the future. This monograph provides a critical survey of the most important and best-known of these studies, and it also examines the prospects for other countries.

Studies of retirement preparedness vary in complexity and sophistication, and as a result, researchers offer a wide range of forecasts, with some warning of a severe crisis and others being more skeptical about the likely scale of the problem. This monograph appraises the quality of surveyed studies by determining how well each deals with key conceptual issues and how adequately each addresses principal risks.

Going beyond the circumstances in the United States, the monograph also provides international perspective by comparing the “macro” and institutional aspects of pension and health systems in a group of eight industrialized countries, including the United States.

George A. (Sandy) Mackenzie, a native of Nova Scotia, came to the United States over 40 years ago to take up a position on the economic staff of the International Monetary Fund, where he worked for over 25 years. In the latter part of his Fund career, among other assignments he led technical assistance missions to countries in Central America, Central Europe, the Middle East and francophone Africa on a variety of public financial issues, including public pension reform and social expenditure issues. He and his staff also prepared papers for the Fund’s executive board on pension and other public policy issues. After leaving the Fund, Mr. Mackenzie joined the staff of AARP’s Public Policy Institute as their pensions expert. Following his stint with AARP, he became the inaugural editor of the Journal of Retirement, which publishes papers by both academics and practitioners on the economic and financial aspects of retirement, and oversaw the first five years of the JOR’s existence. He now writes occasionally on a broad range of retirement-related issues.