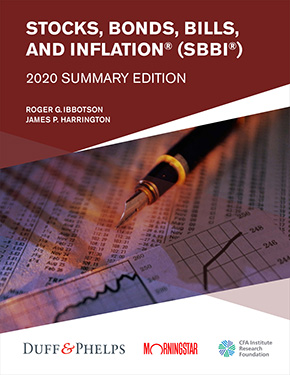 This Stocks, Bonds, Bills, and Inflation® (SBBI®): 2020 Summary Edition enables investors to understand how to calculate, interpret, and use the US historical stock and bond data that the CFA Institute Research Foundation has made available to CFA Institute members.

The data include the capital appreciation, income, and total returns of the major asset classes of the US economy: large-cap stocks, small-cap stocks, corporate bonds, government bonds of various maturities, and inflation. Most of the data start in 1926, and are presented in monthly, annual, decade, or longer period form. The raw data itself are mostly monthly but are not included in this summary volume. Rather, this summary volume includes illustrative data, methodology, formulae, and analysis that will help investors and analysts learn how to use market time series raw data, which is separately available.

Even though many readers of this SBBI® Summary Edition will not have direct access to the raw SBBI® dataset, the summary edition is still likely to be of broad interest. It is an excellent way for those starting out in the investment industry to gain a quick understanding of the major asset classes, how returns are calculated, and the long-run perspective. Many of those investment professionals who are more established in their careers will be aware of the SBBI® dataset but still may not have direct access to the raw SBBI® data. This summary edition will help them to understand the dataset and its many uses, including the impact of size, value/growth, and liquidity on returns. CFA Institute members will have free access to the raw SBBI® data itself, and they will be able to develop their own optimization and forecasting techniques solely with the SBBI® data or combined with external time series data sources.

Roger G. Ibbotson is Professor in the Practice Emeritus of Finance at Yale School of Management and chairman of Zebra Capital Management, LLC, a global equity investment and hedge fund manager. He is founder and former chairman of Ibbotson Associates. Professor Ibbotson conducts research on a broad range of financial topics, including popularity, liquidity, investment returns, mutual funds, international markets, portfolio management, and valuation. He has written numerous books and articles, including Stocks, Bonds, Bills, and Inflation (coauthored by Rex Sinquefield), which is updated annually and serves as a standard reference for information and capital market returns. Professor Ibbotson’s other books include The Equity Risk Premium, Lifetime Financial Advice, and, most recently, Popularity: A Bridge between Classical and Behavioral Finance. He is a regular contributor to and an editorial board member of both trade and academic journals. Professor Ibbotson serves on numerous boards and frequently speaks at universities, conferences, and other forums. He received his bachelor’s degree in mathematics from Purdue University, his MBA from Indiana University, and his PhD from the University of Chicago, where he also taught for more than 10 years and served as executive director of the Center for Research in Security Prices.

James P. Harrington is a director at Duff & Phelps. James provides technical support on client engagements involving cost of capital and business valuation matters, and is a leading contributor to Duff & Phelps’ efforts in the development of studies, surveys, online content and tools, and firm-wide valuation models.
Previously, James was director of valuation research in Morningstar's Financial Communications Business, and led the group that produced the Ibbotson SBBI Valuation Yearbook, Ibbotson SBBI Classic Yearbook, Ibbotson Cost of Capital Yearbook, various international cost of capital reports, and also Morningstar’s online “cost of capital resources center”.
James is co-author of the Duff & Phelps “Valuation Handbook” series with colleagues Carla Nunes and Roger Grabowski. The Valuation Handbooks were published as physical books starting in 2014; as of 2020 the information and data previously published in the Valuation Handbooks has been transitioned over to the Duff & Phelps Cost of Capital Navigator.